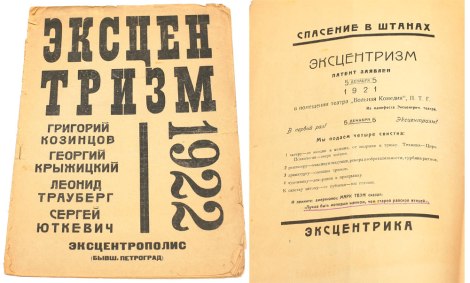 An Exzentrik (eccentric) is a theatrical performance employing an exaggerated form of comedy capable of lowering the audience’s psychophysical barriers with uproarious laughter, opening them to new ideas. According to a contemporary Russian manifesto on ЭКСЦЕНТИРЗМ (Eccentrism, 1922) containing four provocative texts by Soviet film and stage directors, Grigorii Kozintsev, Sergei Yutkevich, and Georgii Kryzhitskii, a Theater of Eccentrism would be capable of awakening the public by employing tactics akin to a variety performance or a circus show.

In “СКАСЕНИЕ В ШТАНАХ ЭКСЦЕНТРИКА” (Salvation in the Trousers of the Eccentric), the first manifesto in ЭКСЦЕНТИРЗМ, Kozintsev tersely formulated the new roles of the actor, director, dramatist, artist, and audience with five “ПОДАЕМ … СВИСТКА” (blasts on the whistle). Starting with the actor (first blast), his/ her role would be transformative moving themselves and the audience from emotion, sadness, fear, anguish, presumably from melodrama (embodied in the performances of Eleonora Duse) to mechanized movement through a topsy-turvy circus prank, akin to Chaplin’s psychological inversions using the tramp character. To achieve greater transformations, the director (second blast) would employ myriad inventions with the ability to generate a rhythm of the their own. The dramatist (third blast) would join together these pranks into a whirling climax, while the artist (fourth blast) would create a kinetic architecture that would also participate in the performance. Lastly, “К СВИСТКУ ПЯТОМУ” (for the fifth whistle blast), the audience would become a part of the spectacle, which “should beat rhythmically upon the nerves … using sirens, shots, typewriters––eccentric music.”

In another text included in the manifesto, “Eccentrism, Painting, Advertising,” in the ЭКСЦЕНТИРЗМ, Yutkevich exclaimed, “LIFE CONCEIVED AS A SKILLFUL GAG … Out of the maze of the Intellect towards the full perception of the real!” Calling for the transformation of painting into an advertising poster for “actuality,” Yutkevich equated “actuality” with life and life with a “skillful gag,” which may also be translated as a witty prank. Therefore, the eccentric performance would have been designed to jostle the audience, pulling them out of their traditional assumptions: “WE CONSIDER ART AS A TIRELESS RAM SHATTERING THE HIGH WALLS OF HABIT AND DOGMA.”